Tommy and Tuppence aka ‘The Young Adventurers.

I always feel that when she wrote ‘The Secret Adversary’ and introduced her readers to Tommy and Tuppence Beresford, Agatha Christie had her tongue firmly in her cheek!

This novel features international intrigue and master criminals; stolen diplomatic documents and a mysterious master of disguise called ‘Mr Brown.’ Our hero and heroine get into all manner of dangerous situations, but survive unscathed.

However, not before they have demonstrated the sort of courage and coolness under threat that put the Great in Great Britain!

It’s a Ripping Yarn, a ‘Boy’s Own,’ Saturday morning cinema serial, story set when it was written, a few years after World War One, it has an innocence, a naivety, that is very appealing.

We don’t – and indeed I don’t think we are meant to – take it too seriously. It’s fun, a pleasant way to pass a few hours on a journey, or nod off over in front of a fire.

Agatha Christie describes Tommy as having, ‘…a shock of exquisitely slicked-back red hair. His face was pleasantly ugly –nondescript, yet unmistakably the face of a gentleman and a sportsman.’And of Tuppence she says, ‘Tuppence had no claim to beauty, but there was character and charm in the elfin lines of her little face, with its determined chin and large, wide-apart grey eyes…’

Agatha Christie also tells us, ‘They were an essentially modern-looking couple’ and there, as far as their later appearances go, is the rub. For to me, Tommy and Tuppence belong in the 1920’s. But more of that later. 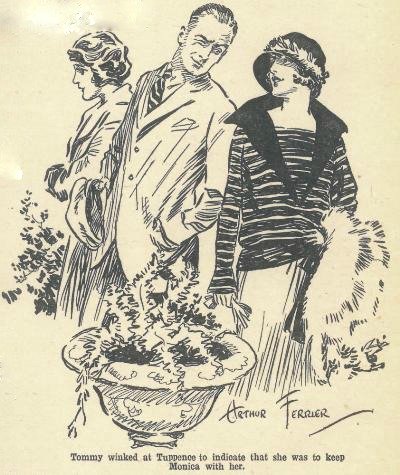 In ‘Partners in Crime’ published in 1929, Tommy & Tuppence are running the International Detective Agency and in a series of adventures, whose intriguing titles include, ‘The Man in the Mist,’ ‘The House of Lurking Death’ and ‘The Ambassador’s Boots’ they copy the modus operandi of several fictional sleuths, including Sherlock Holmes, and even the great Poirot himself. Nice one, Agatha!

One publisher’s blurb describes ‘Partners in Crime’ as, ‘A racy merry-go-round of crime and detection’ and it is.

The Young Adventurers are still worthy of the name, being both young and adventurous, and the book is written with the same light touch as ‘The Secret Adversary.’

They are a privileged young couple with plenty of money and plenty of time on their hands, but they are eminently likeable.

When we meet the pair in ‘N or M’ they are a middle-aged with two grown up children. I really like the book and I like the people they have become in it, but I don’t really want Tommy and Tuppence to be middle-aged! And of course, in the later books, ‘By the Pricking of my Thumbs’ and ‘Postern of Fate’ they are old. And the tone is far more serious, the delightful easy-going atmosphere of the early stories has gone. Tommy and Tuppence are still charming, are still in love and there is still humour to be found, but of necessity, the quality of carefree youth has vanished.

Having said all that, all Tommy & Tuppence’s adventures make for enjoyable reading, and although the pair may not be Agatha Christie’s greatest creation, they are an important part of her success story.

Go From Tommy and Tuppence Back To The Home Page